Way out east... Paintin with Dan Corey in Maine

My blog has been a pretty big snooze fest lately. I'm hoping I can revive it with this post, maybe even zap some life back into it.

I have wanted to go to Maine for a long time, and after meeting Daniel Corey and getting to know his work, I needed to go. Dan is a killer behind the easel. His paintings sparkle with that east coast light. I think the best thing you could do right now is go over to his blog www.danielcorey.blogspot.com and buy a couple of pieces. The pieces look great on his blog, but you just have to see it in real life!

My trip started with a short ride over the ferry in Merrimac. 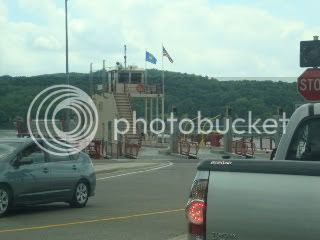 Next, I boarded a plane in Madison. Anyone who has had a conversation with me about flying knows that I do not enjoy it. However, after this flight, I have down scaled my flying anxiety from sheer terror to slight discomfort. Really, it is silly to be afraid to fly, I mean just look at the clouds! 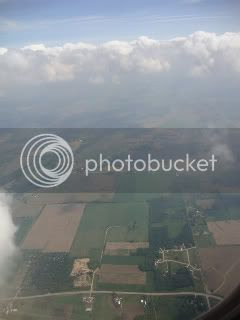 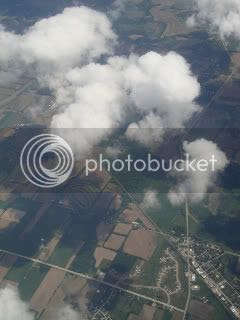 The first morning in Maine was hazy-one of my favorite things to attempt to paint. We drove for a while, and I had the urge to pull over every mile or so to paint. Dan kept going, and we finally arrived at Round Pond, a great place to paint. 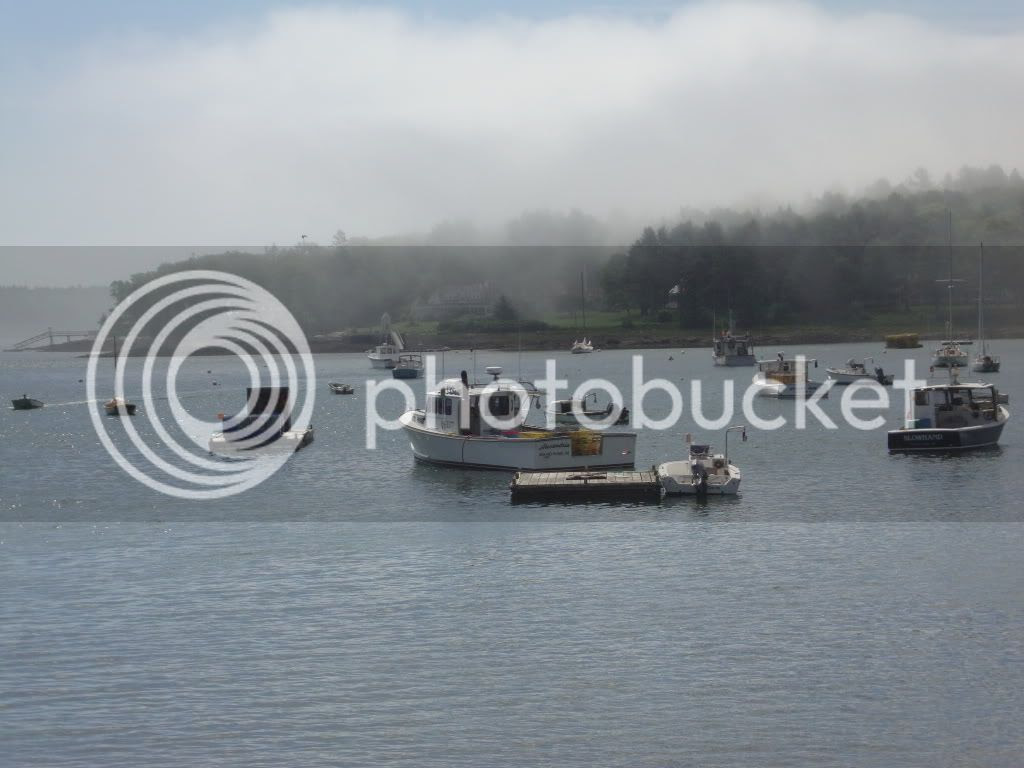 Here is my first effort. Dan set up a palette for me, with loads of color, and also let me try some of his linen panels. There were two colors on this palette, that were new and interesting to me, prussian blue and vermilion. Vermilian is a red that I'd say "goes orange while maintaining it's identity as a red", sort of a Chinese red. I think this will be added to my palette in place of cadmium red. Dan explained that prussian blue is the color of Main, and after several failed attempts to pronounce it correctly, I was attempting to use this foreign blue. I might add, that for the first few of these my blues were ultramarine by Utrecht and the prussian. I like the prussian blue and it was good to step outside of my normal palette. 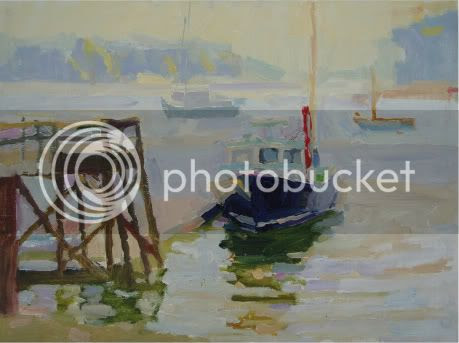 We both painted another study or two at round pond, the second that I did that morning is going to lead to a studio painting.

That afternoon, it was time for me to try a lobster roll and a whoopie pie. A lobster roll is a buch of lobster meat mixed up with mayonaise (I think) smeared on a toasted hot dog bun with a pickle. A whoopie pie is sort of a big oreo, but with chocolate cake instead of the cookies. When I say big, I mean rediculous. There is a roadside place right on Hwy 1 called Patty's that gave us a TON of lobster meat and the best whoopie pie I had while I was out there. She also gave us a side of fried clams for free. Starving artists eating well. 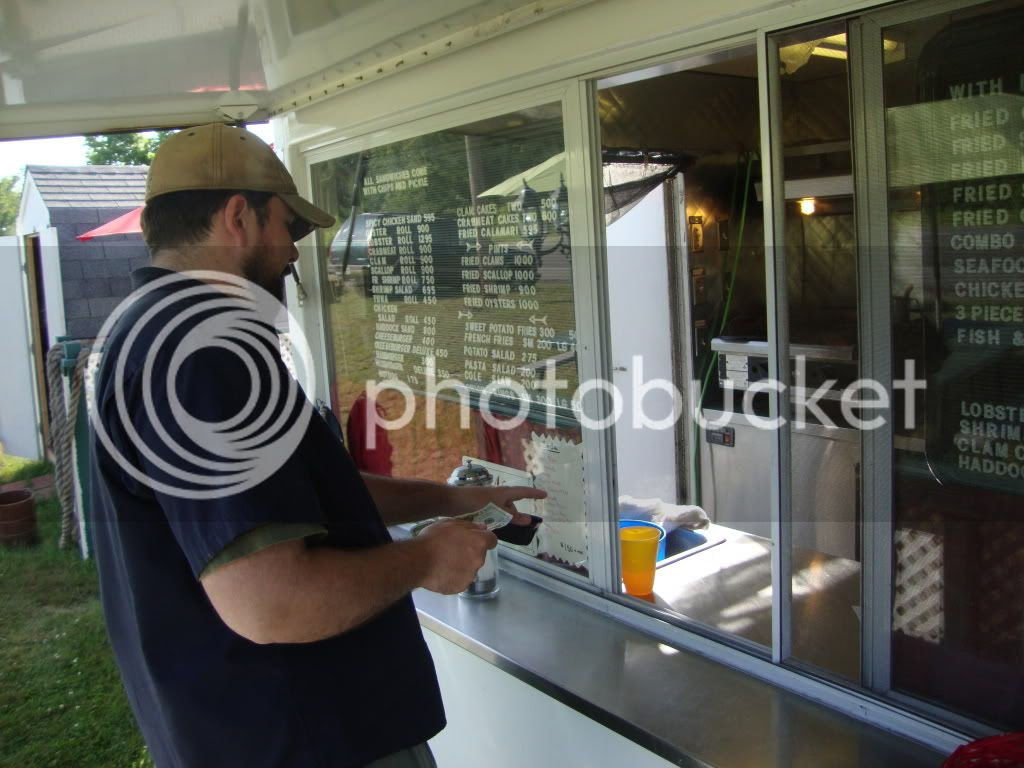 And then the rain came. The rain was ok because Dan is hilarious and kept us entertained the whole time. Dan has a library with lots of obscure landscape painting books that could drain the richest paypal account. He also has a good dvd collection, even though we were stuck inside, we could at least watch somebody else paint. I think you can tell by Dan's paintings the kind of personality he has - larger than life. He had us cracking up watching funny youtube painting video's (which I'll let him post them as not to steal his thunder) and best of all he even kept us updated on the wetcanvas threads while simotaniously playing his acoustic guitar at the same time. Dan is ambidextrious.

The rain cleared one afternoon and it was time for me to eat my first "real" lobster. Here in Wisconsin, I've only had lobster tails, not the whole thing. I have already mentioned that Dan and Raquele are generous, but here is the real kicker. They offered to take me out for a two lobster meal - two lobsters people! The meal also included an ear of corn and a pound of steamed clams. 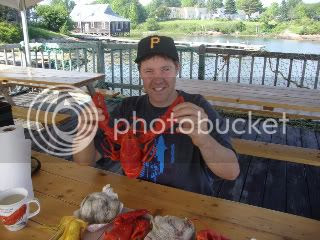 The cups had instructions on how to crack one open... 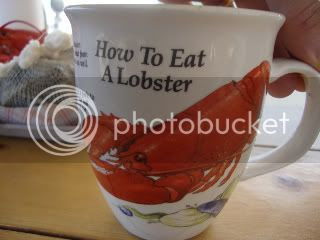 ...but Raquele had the proper technique. 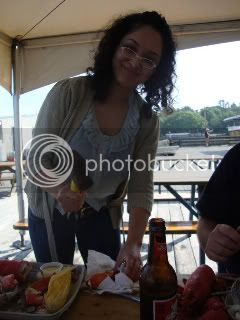 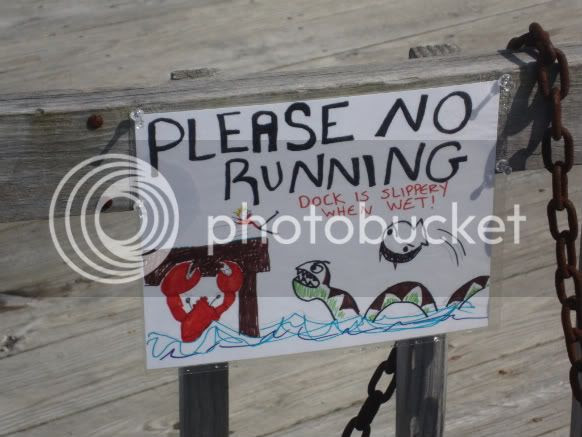 On Friday we went over to Rockport for Colin Page's latest opening. The show was stellar. I believe that the idea behind the show was that the works were mostly paintings from the same port, right behind the gallery. The thing that I admire the most about these works is that several of them were just booeys, or somebody's work truck. His simple compositions are really striking, they will grab you from across the room and pull you toward them.
This is a random shot of the street in front of the gallery. 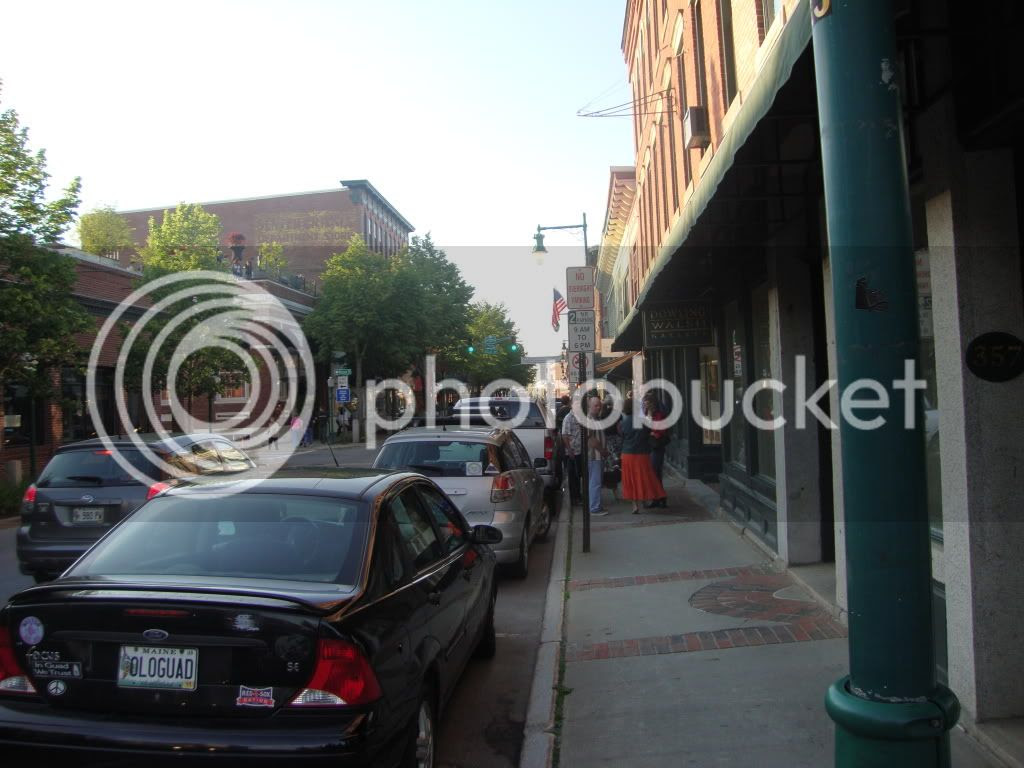 After the opening, we had to try to paint too. 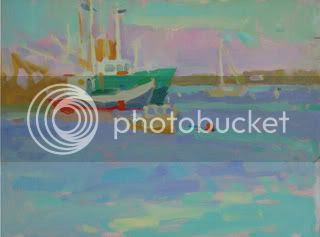 I came home and made this studio painting from the above piece. 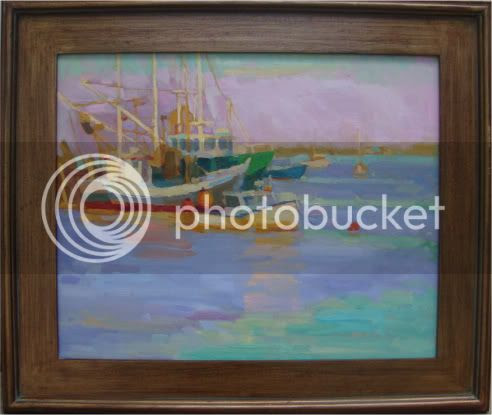 The last day I was around we had some good sun. We got out there early, and went to South Bristol. This is a storybook Main town, where the main street goes across a bridge that has to open every 20 minutes or so to let a boat go through.
In this picture you can see a bit of the bridge. 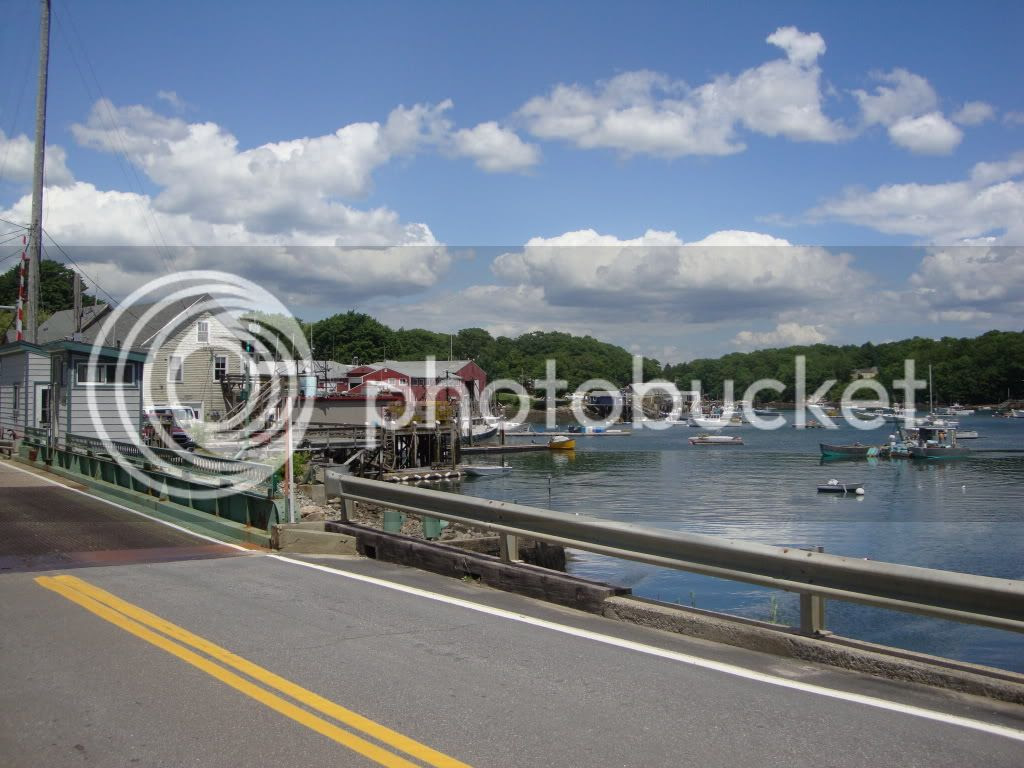 and here is another shot of South Bristol. 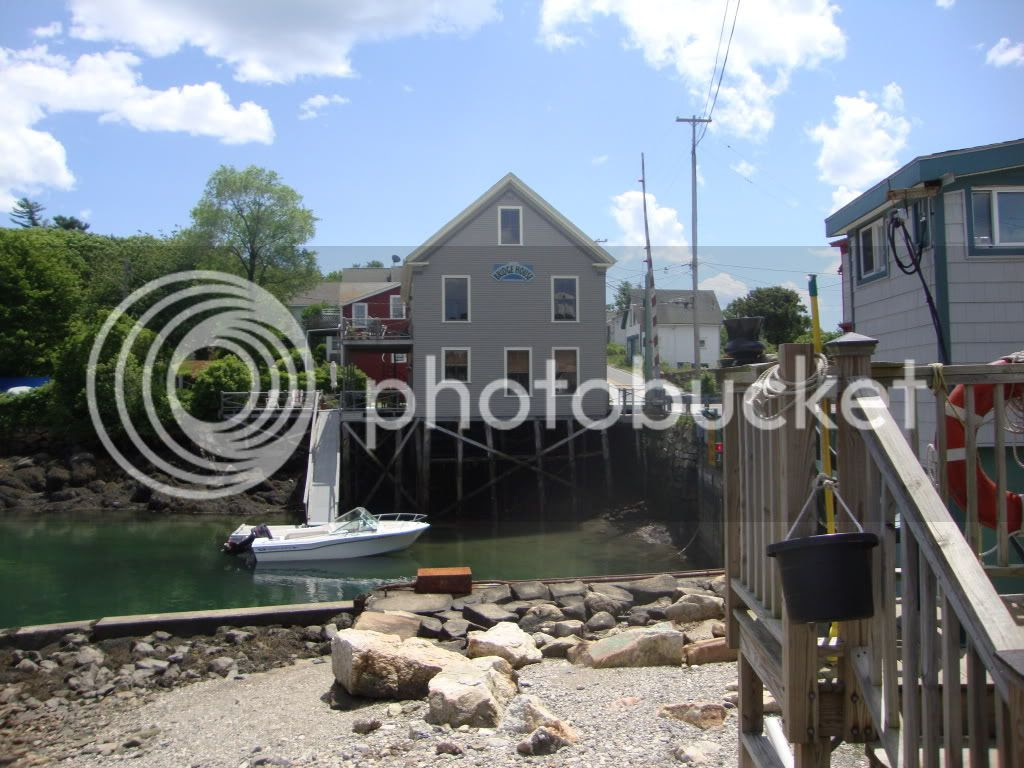 I was having a heck of a time trying to stay in the shade when painting this one. 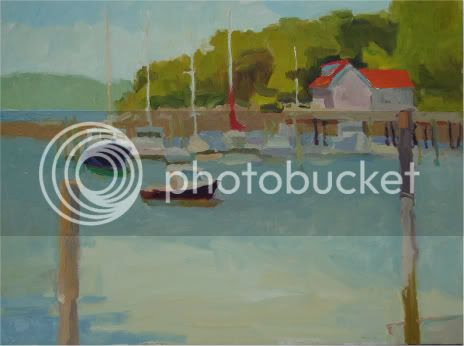 After this, we were pretty exhausted, and it was time for me to go. I'd like to thank Dan and Raquele for having me out there, we had such a good time... my face hurts from smiling so much.