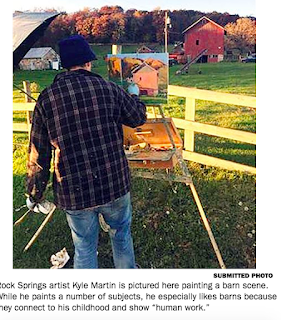 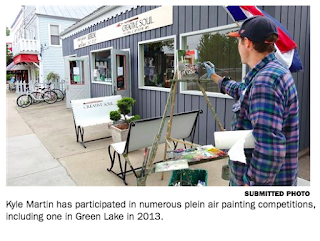 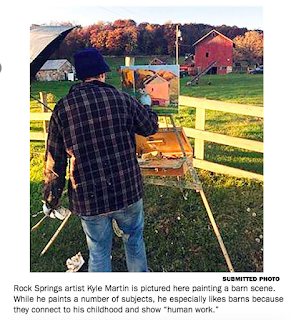 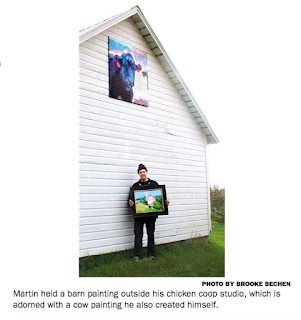 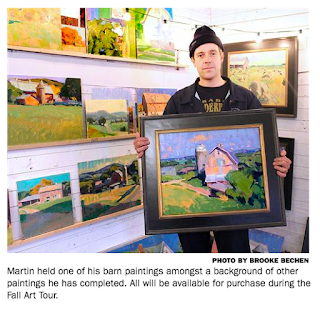 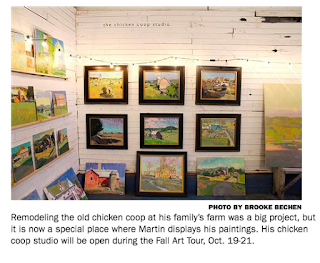 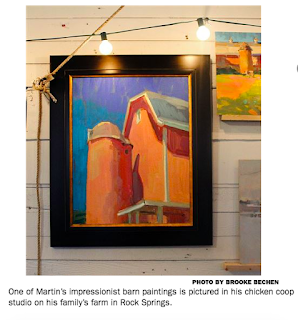 ROCK SPRINGS — 2008 was a life-changing year for 37-year-old Kyle Martin. In June, Martin’s grandmother lived out at the family farm and had to be evacuated after historic flooding; his father worked quickly to move cows, keeping the heifers and calves in an old chicken coop. In the days that followed, Martin’s father rode a boat out every day to feed the animals in the coop — they stood in water for three days, but they all survived.

Martin was working as a graphic designer in 2008, but the company folded unexpectedly, leaving Martin out of a job. His father also passed away in 2008 after an accident at the farm.

But 2008 was also the year Martin started painting every day. And it was the year he decided to return to school to pursue a degree in art education.

Kyle Martin grew up in Reedsburg, the son of a farmer. His father worked each day on the family farm, milking 25 to 35 cows during a time where “everyone had cows and everyone milked,” he said. His mother grew up there, too, with the farm in her family for more than 100 years and the road it sits on — Schneider Road — bearing her family’s name.

“When I was a kid, I milked cows before school and would look out at the barnyard and see all the colors transformed,” Martin said. “When the sun comes up, everything is bathed in this golden light.”

Martin now lives on the farm, and after some coaxing from his mother, has remodeled the old chicken coop that once served as a safe haven for cows during a flood into his art studio. And while the cows are now gone, 40 acres continue to be cropped by renters, with 100 acres of river, marshes, natural springs, birch forests, sand beaches and more all available to serve as subjects for Martin’s plein air impressionist-style paintings.

Some of the farm land is bordered by the Baraboo River, with lots of marshy areas to explore. During the winter months, Martin and his dog, Porter, venture out a bit more; with everything frozen, it’s easier to get to areas that may not be accessible during the warmer months. One of his favorite spaces is a clearing where a little winding stream runs through and where wildflowers pop up in all colors in the spring.

But when Martin isn’t walking his own land, he’s cruising the backroads of Sauk County, looking for scenes that jump out at him with their perfect balance of color and light. With his easel, paint box and other materials crammed in the back hatch of his car, Martin pulls over, sets up his easel and gets to work.

“Painting outside really helped me discover the countryside and discover what was out here,” he said.

It also gives him exposure as an artist.

“I’m outside painting so people see me,” he said. “It’s not every day you see someone out in a field painting.”

Sometimes, Martin even packs everything up and paints at night, attaching a lamp to his easel and painting by moonlight.

While his subjects vary, Martin cannot deny that his landscape paintings are popular. However, he’s drawn to painting barns and farm scenes, partially because of his childhood on the farm but also because barns are disappearing from rural landscapes, many barns are red and contrast beautifully with a green landscape and the shapes of barns are interesting to the eye.

“Barns also show human work,” he said. “And they create connections with people — that’s the real beauty of it.”

Many of Martin’s paintings have been featured in local galleries, but the public also has a unique opportunity to connect with Martin through the Fall Art Tour, celebrating its 25th year in southwestern Wisconsin in 2018. Featuring almost 50 different artists in their often private studios, the self-guided Fall Art Tour is scheduled for Oct. 19-21.

During the tour, Martin will be in his chicken coop studio — its walls adorned with close to 100 framed paintings for sale. He has been participating since 2011 and is also involved with a core group of artists who work on marketing, making the brochures and planning infrastructure for the tour.

“You don’t realize how huge it is until you go on it,” he said. “I get 800 people out here in rural Rock Springs.”

The Fall Art Tour is Martin’s biggest event of the year, drawing people from near and far to the area. He enjoys meeting the people who visit; for many of them, memories are sparked upon seeing his paintings.

“They just love it; when they get out here and step out of their car, they just connect with the place,” he said. “And for them, meeting me is part of it, too, as I can tell the story of the painting.”

Martin also makes connections with local youth as he is an art teacher in the Baraboo School District. He lends his graphic design talents to those assembling the yearbook, too. He aims to instill in his students that painting can be a passion in their lives and it can give them more than what looking at a screen can do.

Teaching in the district has also given him ambitions to teach others about art and passion. “I’m at a point where I reached my goals and I want to give back,” he said. “I’d like to give the gift of painting to people.”

Martin and his girlfriend are working on creating a website that features all of his paintings but can also serve as a place for education. He has held painting workshops in the past and would like to continue teaching those workshops in the future.

“When you’re in the golden hour, you really feel alive,” he said. “I want more people to be able to enjoy that.”
Posted by Kyle Martin at 10:11 AM No comments: 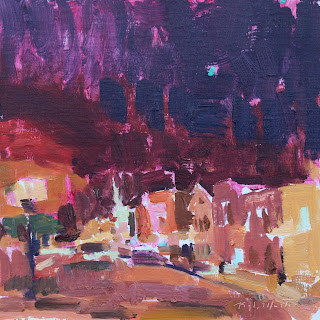 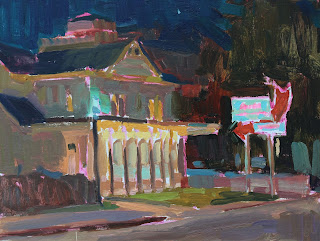 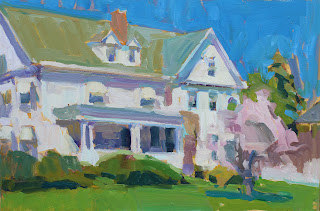 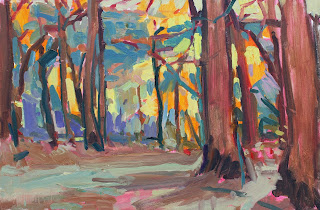 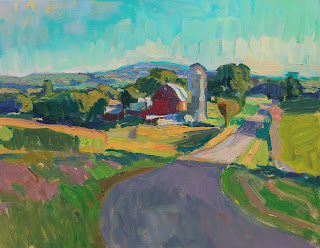 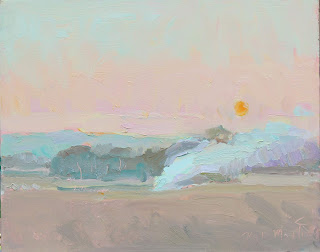 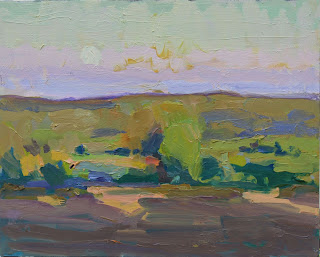 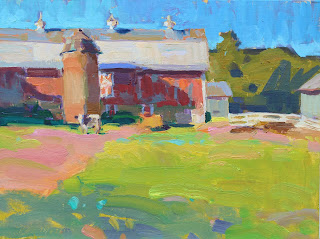 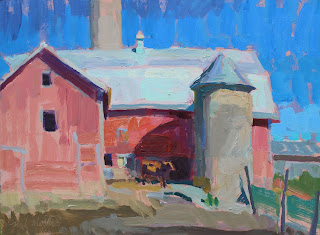 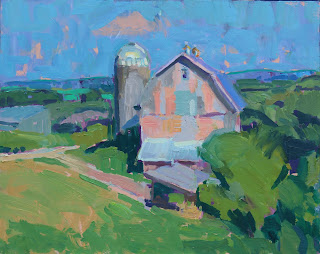 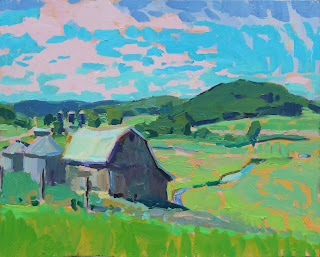 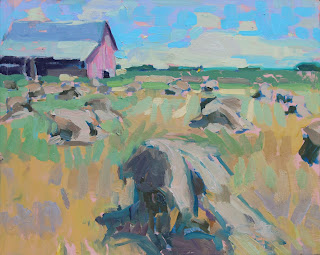 Posted by Kyle Martin at 8:12 AM No comments: