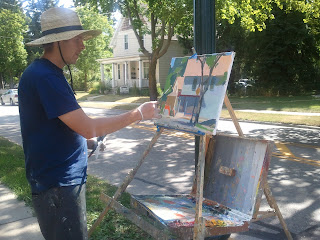 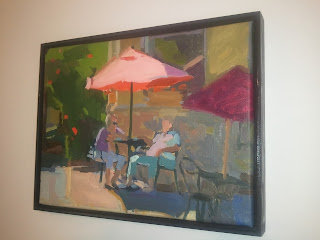 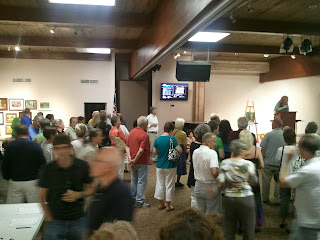 I have been participating in several plein air painting events this summer. Last week was the Beloit WI, Edge of the Rock Plein Air event, sponsored by Friends of Riverfront. Besides some visits to the skate park in Beloit in 2000, I have not been there in over 10 years. The best part of the 10 day painting event were the people involved.
On the first morning Wendie Thompson pulled up beside me on the interstate, honking her horn and waving. I sped up and followed her to the Visit Beloit headquarters downtown (See first pic, below). As is customary with these events, in order to participate, we had to have our canvases stamped on the back, which proves that the pieces were created during the event.


Nicki Meyer was giving tours of the riverfront on her golf cart. I might not have agreed to do the tour if it was sunny, but I'm glad I did. I painted 8 pieces in the 3 days that I participated, all of which I found during this tour.
The first day was not too inspiring to paint. It was dark and cloudy. I ended up painting two pieces, but I'm much more interested in sunny days, so I decided I would come back soon. I had a workshop at my home studio (Chicken Coop Studio) over the weekend, so that kept me at home for the next 4 days.


I returned on Monday, June 4 and painted morning until dark. Artists in the event would be allowed to present 2 works, and as always, I need to paint several works to end up with something worthwhile. While painting my first piece of the morning, a 20x24" that did not get entered, I chatted with a man named Bob, who works at the potato chip company Kettle. He was a nice, hard working man, who enjoyed watching me paint so much that he gave me 10 bags of Kettle chips that he had in his car. Beloit has several large companies, and it was interesting talking to Bob and getting the low down of all the different industry in town. I also met Sandy Kincaid. Sandy is passionate for painting, and she is a driving force behind the planning and success of the event. She was combing the area, looking for artists to give bottles of water. This was welcomed, as the day was very hot. She asked if there was anything that she could do to accommodate me further, and I looked over at her and noticed the light hitting her white hat. I asked her if she might be interested in sitting for me later that evening, to paint her into a late light composition, and she agreed. She showed up at the exact time that I suggested, just as I was finishing my second piece of the day. She was seated on some rocks, on the riverbank of the Rock River as I painted her. It was great of her to show up, and I ended up using that painting as one of my pieces for the show.


The next day, I drove to Beloit again. This time, I returned to the same area that I painted Sandy in her hat, and found a composition. I painted 3 paintings again that day, and was satisfied with the second. It was a composition showing the landing, an area with a large stainless steel sculpture and park/plaza where people go to fish. I had two paintings to exhibit at this point, and I took a day off to prepare for and load my car for a workshop that I held on June 8 & 9 in Lima Ohio.

I dropped off work on my way to Lima on June 7. While there, I got to visit with some of the other artists, and showed them some of the video's on composition that I have been making for my workshop students this summer. Two of my favorite painters from these events, Jenny Anderson and Jason Prigge, were lurking around that morning, and it's always nice to see what they have to offer. Jenny always works with tasty color harmonies, and Jason stayed up all night painting nocturnes. Jason was framing his work in the parking lot, which is not very much fun as I know from personal experience, especially not after staying up all night.

I am going to make a post about the Lima workshop this week (am hoping to have pictures sent to me) so more on that soon. I was not happy to miss the artists reception on Friday, but was having a great time in Ohio. Everyone from the workshop was partying on Friday evening, as we ate pizza and drank beer after 10 or so hours of painting. As we were leaving the restaurant, I got a call from Nicki, and asked her how she was doing. She replied "I'm doing well, but you are even better, one of your pieces won best of show!"

The workshop continued Saturday, and I had to leave directly after the final critique to get back to Beloit and see the show. As I entered the building, at 10 pm or son, I was surprised to see so many people waiting to greet me. The body of work, as a whole was strong, and I am honored to have one of my pieces selected. Sandy even exhibited her hat, placing it on a table below the painting that I made of her. 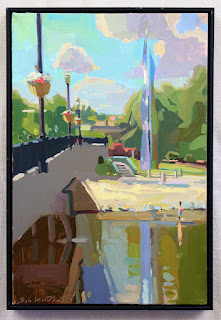